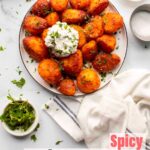 These spicy roasted harissa potatoes are crisp on the outside and fluffy on the inside, with a nice harissa kick. With just four ingredients, they can also be easily whipped up in under an hour.

What you’ll love about them:

If you like a bit of spice, then you might also like these spicy vegetarian pasta recipes, this spicy cashew dressing, or this peri peri sauce.

These potatoes are delicious enough to eat alone or as a side, but in case you need any inspiration, serve them with:

For sure you’ll have some harissa leftover after making this recipe. Once opened, most commercial brands of harissa should be stored in the fridge, covered (put the cap or lid back on) for up to six weeks. Plenty of time for you to use it up making…

With just four ingredients, there aren’t many substitutions you can make in this recipe. Have a look at what ingredient you’ll need in the image below and we’ll see what can be swapped out or omitted.

Harissa paste: This is obviously a bit of an essential ingredient for harissa potatoes. The one thing I would point out here is that store-bought brands really vary in quality and spiciness.

For this recipe, I used Dea harissa, my favorite, which is a good spicy authentic harissa paste. If using a less spicy harissa paste (like Le Phare du Cap Bon which is very mild), you could easily double the amount.

Potatoes: Again, a bit of a no-brainer. I would say you could swap out the potatoes for sweet potatoes, which are amazing when paired with spicy sauces, but I’m not sure how crispy they would get and haven’t tested it out yet.

I used a mix of whatever I had to hand when shooting my final test recipe, as I had used up my lovely roasting potatoes on previous tests. Ideally Yukon Gold, failing that russet or red potatoes will do in a pinch.

Olive oil: I live in Spain and love using olive oil for just about everything. Using it to roast your potatoes will definitely give them more flavor, just don’t whip out your expensive extra virgin olive oil.

A cheaper standard olive oil will do just fine. If you don’t have olive oil substitute with a mild flavorless oil that won’t compete with the harissa paste, canola, or sunflower for example.

Salt: A well-salted potato is a thing of beauty. In this recipe, the water for parboiling the potatoes is salted to really give the potatoes some flavor, and then just a teaspoon is sprinkled when they’re tossed with the harissa.

If you are trying to keep your sodium levels down you can of course skip adding the salt to the water, and salt to taste with a low-sodium or sodium-free salt substitute. Otherwise, salt away and don’t skimp on it.

How to make them

Harissa potatoes are simple to make, but like most perfect roast potatoes you do need to pay a little attention to timing. In this section, I go over the different steps involved with process photos to highlight what should be happening at each stage.

First, peel your potatoes and cut them into one and a half-inch chunks, a little smaller than roast potatoes usually are cut. Pop them into a large pot and add enough water to just cover the potatoes by about half an inch. Add a tablespoon of salt to the water (image one below), cover with a lid, and set on high heat to boil.

In the meantime, set your oven to preheat to 400ºF (200ºC). Take a large oven roasting tray or a large baking tray, and line well with baking paper. Make sure there is nowhere for oil to seep under. For example, I overlap two sheets of baking paper and place a third in the middle.

Now add the olive oil to the middle of the lined tray (image two below) and pop it into the oven. The potatoes will not absorb all the oil (only about half) but it’s important to have lots for re-coating the potatoes later and keeping them crispy.

When the water in the pot comes to a roiling boil, remove the lid and allow it to boil for two minutes. Be exact about the timing (use a timer) as overdone potatoes will fall apart when you’re roughing them up in the next step.

Drain the potatoes in a colander (image three above) and invert the pot to let any remaining water out. Shake the potatoes once or twice to make sure all the water is off them, and add back to the (hopefully) dry pot (image four above). If it’s not completely dry, give it a quick wipe with some paper towel.

Place the lid back on the pot and hold the lid down tightly, shake the pot very hard to really roughen up the surface of the potatoes (see image five below for how the potatoes should look after shaking). Some people like to use a colander to rough up the potatoes but in my experience, it really doesn’t roughen them up enough. The rougher the surface = the crispier the potato skin.

Now remove the lined tray with the oil from the oven, and carefully and slowly tip the potatoes into the oil (if you drop the potatoes in too fast or from too high a distance you could get splattered with hot oil).

Using a large tablespoon or two (I find it easier with two spoons), quickly toss the sizzling potatoes in the oil so they are covered with oil. Space the potatoes out a little so they aren’t touching (image six below). Spaced potatoes mean less moisture in one spot (so crispier skins) and less likelihood of the potatoes sticking to each other.

This means the browned side should be up (as in image seven above) or facing the side, depending on how you’re potatoes are cut, but not on the bottom. Add back to the oven and set the timer for another fifteen minutes.

When the time is us, remove the tray again, and using a slotted spatula, fish slice, or spoon, transfer the potatoes back to the pot you were using before. Make sure to place the tray back in the oven to keep the oil hot.

Add the harissa paste(image eight above). If you’re using harissa from a tube and not a jar, then I recommend actually weighing instead of using tablespoon measurements, just because it’s much easier, but it’s up to you. Note that if you’re using a quality spicy harissa paste like DEA, then:

Grab your spoons again and gently toss the potatoes in the harissa paste until they’re evenly covered with harissa. Now sprinkle the teaspoon of salt over (image nine below) and toss again until the salt is evenly distributed.

Take out the tray again and repeat the step of gently placing the potatoes in the oil and tossing until lightly coated (image ten above). Place back in the oven for five minutes. Remove and flip the potatoes once more. Roast a further five minutes.

Done! Test a large potato to make sure it’s done and to taste for salt. Serve immediately.

How do you store these once cooked?

As with most roast potatoes, harissa potatoes should be eaten freshly made. If you do happen to have leftovers, keep them covered in the fridge for up to three days and “re-roast” in the oven at 400ºF, covered with aluminum foil and with a little hot oil for 10 to 15 minutes. Alternatively, if you’re lucky enough to have an air fryer, cook them for ten minutes at 200ºC with a spritz of oil spray.

Can these be made ahead?

Not really. What you can do is follow the recipe up until roughing up the potatoes, then stop and cover them tightly and keep them at room temperature (for no more than two hours) until you are ready to finish making the recipe.

Can these be frozen?

Yes, and they actually cook up better from frozen than from being in the fridge! Reheat without defrosting in the oven, covered with foil, for about 20 minutes at 400ºF.

Did you make these ? Let me know how much you loved them with a star rating, review, and/or comment below.

Take a picture of your finished dish and tag me on Instagram (@the_fiery_vegetarian) or connect with me on Facebook, I love seeing all your creations!

3 tablespoons of harissa for mildly spicy, 4.5 for medium, and 6 for hot.

If you don't have any olive oil you can use any plain flavorless oil, e.g. canola or sunflower. You don't need to use EVOO.

If you're watching your sodium levels skip seasoning the water and use a low-sodium salt to season the potatoes after adding the harissa.

It seems like a lot of olive oil but it won't all be absorbed!

what's the dip shown in the photo?

Hi Paula! That's a great question. This dish does really well dipped in anything creamy like ranch sauce or sour cream, but I do personally count calories and I live in Spain which led me to my favorite creamy low-calorie dipping sauce that I use in a lot of my shots but never did a recipe on as I didn't see the need for it: A low-calorie high protein dip that tastes like Boursin.

So I personally make my dip with one cup of 5% Fage or full-fat cottage cheese or my vegan sour cream, one cup with one teaspoon olive oil, 1/4 tsp salt, 1/2 tsp dried garlic, 1/2 tsp dried onion, 1 tsp dried dill, 1/2 tsp dried chives, 1/2 tsp dried basil, 1/2 tsp dried parsley and 1/4 tsp freshly ground black pepper. I make it just before I start making the potatoes and leave it in the fridge so it can chill and the flavors mingle and it's amazing!