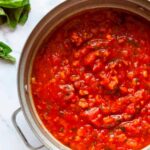 Known as sugo all’arrabbiata in Italy, which loosely translates as “angry sauce”, I can guarantee that nobody you serve this to will be angry with you!

I’ve been working on this sauce for years, trying to perfect the flavors of my favorite version ever, which was served at an Italian restaurant in Valencia run by a lovely couple from Tivoli.

I later moved from Valencia to Madrid, and when I went back to Valencia for a visit, I discovered that the restaurant had unfortunately shut down.

I’ve been pretty disappointed with other versions I’ve had since, until now!

Which pasta should I serve arrabbiata sauce with?

Traditionally, arrabbiata sauce is served with penne rigate (the penne with a ridged surface instead of smooth, in the photo above). I find it hard to get good penne here in Spain so I usually use rigatoni as the ridges also catch all the tasty sauce.

Whichever type of pasta you use, do NOT add oil to your drained pasta or rinse it to prevent sticking, as this will also stop the sauce from sticking to the pasta.

I always get the sauce ready before the pasta so that the moment I drain the pasta I can add it to the sauce in the pan and toss it well.

This is a pretty easy, if not super quick arrabbiata sauce recipe, and it will be even easier and faster if you have a food processor.

Those who want their food and want it now may have more luck trying my easy ten-minute vegan roasted red pepper sauce for pasta.

It takes about 45 minutes to make this sauce if you need to chop the tomatoes and onion and garlic by hand, and 35 with a food processor (and either way it’s totally worth it, I swear).

First, heat up the olive oil in a pan over a medium-high temperature. Next, chop the onions and add them to the pan. Fry the onions for five-eight minutes, until golden, then reduce the heat to medium.

Make sure to stir the onions often or they will burn and impart a bitter taste to your sauce.

Add the chopped garlic and chili flakes and fry for about two minutes, stirring often. 1/2 a teaspoon of chili flakes gives me the perfect hit of heat, nearing the edge of my spice tolerance levels, but hubby and the kids find it too spicy and stick with a 1/4 teaspoon.

Remember that toasting the chili flakes will also increase their spiciness.

Next, add the chopped fresh tomatoes to the pan. DO NOT substitute with canned chopped tomatoes! I usually roughly chop the tomatoes to separate the fleshy sides from the core and chuck them in my food processor to chop them up properly.

After five minutes, add the salt and cook the tomatoes five-ten minutes more, or until the tomatoes have broken down.

Next, add the water and the canned crushed tomatoes. Note that this is NOT the same as tomato purée/ tomato concentrate, which is the thick concentrated tomato sauce that looks more like ketchup and is a deep red.

If you can’t find any canned crushed tomatoes, you can substitute them with some good passata (preferably one without added herbs).

You can also use canned chopped tomatoes and whizz them up in the blender, or as a last resort, freshly pureed tomatoes (it won’t have the same depth).

Make sure the heat is set to medium and simmer for 15 minutes. It is likely that you will get some of those apocalyptic splashes, seeking to destroy your clean countertop and backsplash, so I suggest partially covering the pot with a lid.

Once the sauce is thick enough to your liking, take it off the heat. Toss the pasta with the sauce and chopped basil leaves. If desired you can also add a little of the pasta cooking water to loosen the sauce and help it “cling” to the pasta more easily.

Serve with plenty of nutritional yeast, vegan parmesan (I love Violife) or a regular parmesan (rennet-free if you’re vegetarian), and lashings of freshly ground black pepper.

If you’re not going to eat the sauce straight away, then store it separately from the pasta or it will thicken and make the pasta a little gummy.

What to serve with pasta arrabbiata

This is also absolutely AMAZING with some good quality garlic bread (like this super easy 15-minute vegan garlic bread) on the side.

Although pasta arrabbiata is usually served on its own as a main course, I do love having a slightly smaller portion with a nice green side salad.

How many servings does this recipe make?

I absolutely despise not having enough sauce for pasta, so I double-checked and weighed everything out and can tell you that the amount of sauce this recipe produces is the perfect amount for about 17.5oz (500g) of dried pasta.

This will give you around 4 large platefuls, or 6 smaller platefuls (perfect with a side salad, garlic bread, etc.).

What’s the difference between marinara and arrabbiata sauce?

While both sauces are quite similar, arrabbiata is spicy and marinara tends to contain dried herbs or a mix of fresh herbs.

Yes, it normally is – just be careful if you order it when out at a restaurant as many it’s commonly topped with parmesan or Grana Padano.

Can I freeze arrabbiata sauce?

Did you make this arrabbiata sauce recipe? Let me know how much you loved it with a star rating in the recipe box, review, or comment below.

Store the sauce separately to the pasta, for up to five days in the fridge.

You can substitute the canned pureed tomatoes with passata, or blended chopped canned tomatoes.

Nutrition is calculated before adding pasta!

We made it last night and my kids really enjoyed it. Thank you

Great Marita, so glad they liked it!

I’ve been looking for a good arrabbiata recipe for years and this is exactly what I was looking for! Amazing.

So happy you enjoyed it Miranda!

Can this be frozen? If so, for how long? Trying this out on family in a few days.

Hi there! The sauce can be frozen for up to three months in the fridge. What I would say is if you're freezing it, don't add the fresh basil, add it later after defrosting and just before serving. And of course, as I'm sure you know, don't freeze it mixed in with pasta.

Made this for our New Years Eve dinner and it was delicious! Will come back to this recipe again :)

So happy you liked it Niamh! Thanks for stopping by and leaving such a lovely comment!