Posted on Published: November 10, 2019 Categories All Recipes, Lunch and Dinner

After living in India for just over two years I just can’t get enough of lentils, and I’ve been working on this delicious vegan dal makhani recipe for quite a while. The perfect balance between easy and delicious, yet authentic-tasting Indian food.

This vegan dal makhani (also known as butter lentils) can be made with jarred cooked lentils and kidney beans, or in a pressure cooker/instant pot, depending on how much of a hurry you’re in.

Using pre-cooked lentils and kidney beans will get this recipe ready in 45 minutes with a minimum of chopping.

If you’re like me and you love Indian food, especially easy vegan and vegetarian Indian food, you might want to check out some of my other recipes, or go the whole hog and serve various curries and pretend you’re at a restaurant! Try it out (you won’t be disappointed):

Super filling and cheap to make, this homemade version is just as good as a restaurant-style version at a fraction of the price and calories. Ditch the takeaway and wow your family, friends or guests with this fakeaway!

What is dal makhani served with?

Dal makhani is a filling dish from the north of India and this delicious lentil curry with lashings of sauce is perfect served with roti or naan bread.

I usually serve curries with Indian flatbreads first to tear off and dip in and scoop up the luscious sauce with, and have steamed basmati rice on standby to mix with any leftover sauce.

You can also add a dollop of plain unsweetened vegan or non-vegan yogurt, or try my gut-healthy kefir onion raita. Honestly, this lentil curry is so rich that a bit of bread and/or rice is all you need.

Traditionally, no, not really. I’ve cut down on the fat in this homemade easy vegan version, but it’s still not low-calorie diet material. Especially if you add buttery spread, but it is really necessary to get the full rich taste you would expect from dal makhani, I’ve just kept it to a minimum.

Having said that, fat and calories aside, the fact that this dish is full of lentils and kidney beans makes it rich in fiber, B vitamins, iron, and protein, among other vitamins.

Heat the sunflower oil over medium-high heat and add in the cumin seeds when the oil is hot. Let the cumin seeds sputter and brown but don’t let them get too dark (nearly black) as they’ll be bitter.

If you don’t have cumin seeds or just plain forget to add them in first, you can substitute by adding ground cumin with the other spices later.

When the seeds have browned, add in the chopped onions and stir well. Fry until the onions are golden and tinged brown at the edges, as in the photo below. Stir often to prevent them from burning. Then add in the crushed garlic and finely chopped green chili.

This is also the point you’ll add in the ground cumin (1/2 tsp) if you decided not to go the cumin seed route earlier.

For the ground cinnamon, clove and nutmeg you’ll either want to add in a healthy pinch or if they are stored in the little jars with holes, two shakes.

Mix very well and fry another two minutes, at which point you should be able to smell the deliciously toasted spices.

At this point, you’ll need to add in the cooked lentils and kidney beans. An authentic dal makhani is normally cooked slowly for many hours (indeed I’ve had the pleasure of tasting two-day dal makhani in India).

I have TOTALLY cheated by using precooked lentils and kidney beans in this recipe to make it faster.

If you wish to use dried lentils in the pressure cooker or instant pot you can do so easily and I’ll give instructions below.

Add in the cooked lentils and kidney beans and mix well. Next add the pureed tomatoes, water, and vegetable stock cube.

If you’re using precooked beans and lentils, you’re going to want to simmer them on medium-high for ten minutes, on medium for ten minutes, and then add the salt and simmer a further ten minutes on a low-medium heat until they resemble the photo below and look a little dry.

Like risotto, you’ll need to keep an eye on your lentils and stir often, or they will stick and burn.

In theory, you could turn the heat up high and stir frequently and reduce the mix in ten minutes, but you won’t get the slightly viscous characteristic texture of real dal makhani.

If you’re going the dried lentil route, make sure they are presoaked brown or preferably black (beluga) lentils, and drain and add to the pan with the liquid and then cook according to instructions.

I normally use a pressure cooker and bring to high heat and turn down to low heat after the first whistle and cook for 15 minutes and quick-release the pressure.

Note I said the dried lentil route – I don’t recommend going the dried kidney bean route as well, as cooking and soaking times are so different for kidney beans. As we say here in Spain, la cosa se complica (it gets complicated).

If you really want nothing to do with precooked beans, then you can just do dark or black lentils and call it a day.

If in doubt, cook less time and check. You can always cook more, but burnt lentils are hard to recover from.

Bear in mind that if you use dried lentils and cook via the stovetop/pressure cooker/instant pot method, once cooked add the salt and you’ll still need to cook them down over a low-high heat stirring often until they look like the picture below.

Once the lentils are cooked down, add the coconut cream, lemon juice, garam masala and cook for a further two minutes before mixing in the chopped fresh cilantro. Mix well and serve, enjoy! Will keep up to five days in the fridge, or three months in the freezer.

If you made this recipe please take a photo and tag me on Instagram (the_fiery_vegetarian) or leave a star rating in the recipe box and a comment in the comment section below. You may also enjoy some of my more recent posts:

1) This will keep up to 5 days in the fridge and is easy to double or triple up. Freezes well, up to 3 months.

2) At the stage of adding in the cooked lentils, you can sub out dried lentils and cook according to pressure cooker/instant pot/stovetop timings but don't add the salt in until the lentils are cooked and you will still need to cook down the lentil mix until most of the liquid is gone.

3) I don't recommend using dried kidney beans due to the time difference in cooking lentils and kidney beans. If you must, skip the kidney beans altogether and substitute for the same amount of cooked lentils or half the amount if dried lentils. 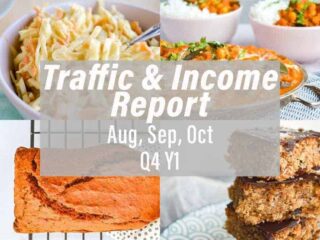 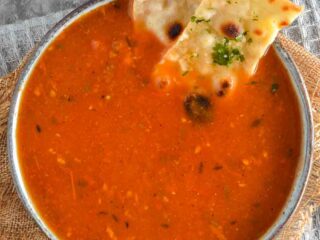