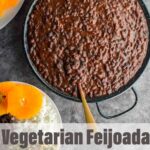 If black beans are your thing then you are definitely going to love this rich vegetarian and vegan feijoada (black beans Brazilian-style).

Why? Because this veggie feijoada is jam-packed with umami goodness. I’ve tested and retested this recipe a million times (this is an updated and improved version of the first vegetarian feijoada recipe that was on this page!).

I haven’t been testing it to replicate the exact flavors of feijoada as that’s just not possible in a vegetarian version.

I’ve been testing to try to get a similar balance of depth of flavor – no mean feat when traditional feijoada gets most of its flavoring from simmering cuts of meat in it for hours and it seems I’ve finally cracked it.

Warning, this recipe is definitely not a 100% authentic feijoada recipe, as there are no authentic vegetarian feijoada recipes, and some non-traditional ingredients may have been used in the quest for tastiness.

You can make this vegan feijoada recipe with dried beans in the instant pot, in a pressure cooker, on the stove, or with canned beans. Leftover black beans? Use them up in this vegan creamy black bean curry.

All the instructions for the different methods are below. It’s cheap as chips, especially if you use dried beans and makes a lot, as well as being really easy to double up on for food prep, and freezes like a dream.

There’s also very little chopping involved (yay!) or none at all if you own a food processor.

If you’re a fan of legumes you should also try these other delicious and pocket-friendly recipes:

Normally, Feijoada is a meaty stew with beans and different cuts of pork or beef. It’s the national dish of Brazil and is also eaten in other countries such as Portugal, Angola, and Cape Verde, among others.

In Brazil, it’s traditionally made with black beans most of the time, and this is the version I am most familiar with.

How did I make this vegetarian Feijoada?

I had tried a few veggie feijoada recipes and while they were nice, there was nothing very stand-out-ish about them and I felt there could be quite a bit of improvement.

To approximate a rich plant-based version of this popular dish, I spent time researching the ingredients and concluded the key tastes could be boiled down to:

Armed with this pseudo-scientific information, I set about making it. I partially caramelize the onions and add good quality Spanish smoked paprika for the spices.

Initially, I cooked the onions separately with some garlic and cumin for two reasons.

The first is that in my experience, oil-released flavors tend to be dimmed by pressure cooking, and the second is that cumin is far tastier when toasted. However, later I found a quicker way to get the same flavor.

The final piece of the puzzle was the addition of some marmite (yeast extract). Argh, don’t walk away! I know marmite is one of the great dividers, you either love it or hate it.

I personally am in the HATE camp, but a touch of it can do amazing things for sauces. It is optional in this recipe but I heartily recommend it in this yummy vegan feijoada recipe.

What is feijoada served with?

In my town outside of Madrid, there is no manioc to be seen and no collard greens either. Hence when serving Feijoada in my house I tend to serve it with some fried chard and orange slices and white rice.

I’m actually not a huge fan of oranges so sometimes I serve it with lemon quarters! If chard is out of season I’ll fry some kale instead with a dash of smoked paprika.

When you need infused flavours and tender beans, plus super economical cooking, the pressure cooker or Instant Pot is your best friend. However, this totally depends on the type of bean.

I never pressure cook chickpeas (garbanzos) for example, because in a New York minute you can overcook them, they don’t cook evenly (some are grainy and hard while others in the same pot are mushy) and you also have to deal with their skins coming off.

Black beans, on the other hand, are pretty indestructible. It’s hard to overcook them and they all cook evenly.

Perfect to make Brazilian black beans with! Plus in Spain where I live they are much cheaper to cook in the pressure cooker as they’re 1.60 for a kilo of dried ones, versus nearly €3 for a small can!

Anyway I usually make this recipe in my trusty pressure cooker, but I’ve also included different ways to cook it below.

The recipe as it stands is geared towards instant pots and pressure cookers but can be adapted to slow cookers and stovetop cooking.

Grab two of the onions and chop them by hand or using a food processor. Purée the remaining onion in a food processor blender. It doesn’t have to be perfectly smooth, just fairly liquid!

Next heat the olive oil in the pan over medium-high heat and sauté the chopped onions for 10 minutes. When the onions are slightly golden, at around the 5-6 minute mark, you’ll want to add the salt.

Your onions should be golden and somewhat browned at the edges like in the image above.

It’s of vital importance that the paprika you use is smoked and spicy. It should have a deep red color. More than one dish has been ruined by a crappy mild claggy paprika, unfortunately.

Next, add in the pureed onion and fry for five minutes, stirring often. Don’t worry too much if some bits stick to the pan, this should come off when you add the liquid.

Add the beans, water, and stock cube. Cook according to your chosen method and follow the timings given in the previous section.

In this example, I’m cooking soaked beans in a pressure cooker so I’ll set a timer for 30 minutes from when I seal the cooker and I’ll lower the temperature to medium once the first whistle has sounded.

Once the beans have finished cooking (I always quick release when using my pressure cooker), bring them back to the boil on the stove and add the different kinds of vinegar, soy sauce, and marmite. Simmer five minutes more. Done!

Lots of people like to thicken feijoada by mashing a few beans or blending half a cupful with a stick blender. Personally, I just prefer the look of a clearer gravy, but you do you.

Serve with your chosen sides and enjoy! Freezes perfectly and will keep in the fridge for up to five days.

Did you make this recipe? Let me know how much you loved it with a star rating in the recipe box, review, or comment below.

2. Fry the chopped onions in the olive oil over medium-high heat, stirring often, for 10 minutes. Add the 1/2 tsp salt at around the 5-6 minute mark when the onions are slightly golden.

3. Add all the spices and seasoning from the garlic to the ground pepper and stir well, toasting for two minutes.

4. Add in the pureed onion and fry for five minutes, stirring often.

5. Now add in the beans water and stock cube. Check the notes for cooking times for all methods.

6. After the beans have finished cooking, bring to the boil and add in the two types of vinegar, soy sauce and marmite (optional). Reduce to a simmer and let cook for five minutes more.

7. Remove the bay leaves. If you'd like to thicken the sauce you can blend it a little, no more than half a cup. Serve!

For cooked canned/tinned beans, only add 4 cups of water at first and simmer the beans on a high temperature for 15 minutes before preceding to step 6. You can add up to a cup of water later if you'd like to adjust the consistency.

For soaked black beans cook 8 minutes on high pressure in the Instant Pot and let naturally release for 15 minutes, 60-90 minutes on the stovetop (check the water level and top up as needed) or 30 minutes in the pressure cooker (reduce temperature to medium once the cooker has whistled, quick-release).

For unsoaked black beans cook 25 minutes at high pressure in the Instant pot and let naturally release for 20 minutes, or 41 minutes in the pressure cooker (reduce temperature to medium once the cooker has whistled, quick-release). I do NOT recommend cooking unsoaked black beans on the stovetop.

Thank you for this delicious recipe. My partner is Brazilian and quite fussy when it comes to food, but he loved it. I found it a little spicy, so I added caramelised balsamic vinegar instead of normal balsamic and it balanced the flavour a bit more for me. Thanks again.

So glad you both enjoyed it! And great tip about the caramelized balsamic vinegar, I must keep an eye out for it and try it.

Wonderful recipe, one note, it's a little on the spicy side for traditional fejouada, maybe omit the cayenne, also I added some margarine as part of why the dish works is the low temp fat, made it a treat!

This is SO delicious! My meat eating friend had black beans at a Brazilian restaurant and wanted me to recreate that. So I searched the internet, found this, recreated this, adding some small smoked tofu cubes and some vegan cabanossi (blended) and voilà: He loved this!! Thank you so much for putting this recipe together, it is AMAZING!!

Thanks so much for the lovely feedback Jeana, glad you guys liked it! Love the idea of adding some smoked tofu! I had to look up what cabanossi is but a vegan version sounds like it would be great, I´ll have to go hunt for some now!

Found this recipe after seeing Feijoada on TV and wanting to try a vegetarian/vegan alternative. Holy cow! This recipe is absolutely incredible, possibly one of my favorite ever recipes, I am absolutely in love!

So glad you liked it Laura! This is one that I worked on and tested quite a bit to get something a bit different with lots of depth of flavour so I'm super happy you enjoyed it!

I just want to add, to be honest I didn't read the recipe much, I just threw it all in a pot on the stove and it came out beautifully. I used dried black beans which I steeped beforehand for a few hours on the stove on the lowest heat.

Quick question: where I live in the U.S. marmite is hard to come by, but I know places that sell miso paste. Is that a feasible substitute to get that intense umami flavor?

Hi Rachael! Great question, yes I would say that miso would be a perfect substitute, weight for weight. Let me know how it turns out for you, and thanks for stopping by and leaving a comment.