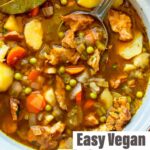 A simple vegan Irish stew with tons of umami flavor, chunks of tender vegetables, textured seitan, and a savory Guinness broth. This is as close to the traditional recipe as possible and ready in just half an hour.

I’ve seen a few vegan Irish stew recipes floating around and was not terribly impressed with some of the ingredients that we never use in Ireland.

Granted, some exceptions do need to be made though when veganizing meat-heavy dishes, but Irish stew is not actually supposed to be meat-heavy.

I’ve substituted the meat in this recipe with some protein-rich seitan and it’s definitely a winner here in our house!

People argue (even in Ireland) about what constitutes a traditional stew but the basic ingredients were usually mutton, potatoes, onions and parsley. In our house, we always had carrots in it as well.

If Irish recipes are your thing, or you’re just gearing up for St. Patrick’s day, then I’ve got you covered with these goodies below:

A quick guide to Irish stew

No, I won’t bore you to bits by rambling on and on about the history of Irish vegetable stew, but a little bit of background never hurt anybody.

Mentions of Irish stew have been recorded since 1800 in Ireland, when stewing came into fashion due to mass poverty.

Some recipes for regular Irish stew recommend adding beef, but in Ireland traditionally it was always made with mutton or lamb. Mutton is a tougher cut of meat so stewing it broke down some of the tough fibres, and it was cheap to boot.

My mother also added barley but I really hate it in stew (with a passion, it’s slimyyyy) and carrots (which I love).

I’ve added celery and peas in this recipe to bulk up the vegetables an flavor but feel free to leave them out if you’re not a fan.

To make this veganized version of traditional Irish stew, you’ll need to have the following ingredients to hand:

Ground white pepper is very much a thing in Irish recipes, I don’t think I actually ever saw black pepper until I was in my teens! As a kid, it was always white pepper on the table in Ireland.

It sounds very simple but trust me, the above ingredients really do make magic happen (mainly the Guinness).

If you don’t have Guinness to hand don’t worry you can substitute it with any dark stout or ale, although you’ll need to check if they are vegan.

What to serve with stew

This dish is a meal in of itself, but if you’d like something alongside I warmly recommend some soda bread or traditional Irish brown bread, with lashings of vegan butter.

If you don’t have those breads to hand and don’t want to make them, then a crusty baguette or rustic style country round will do just as well.

This is a really easy vegan Irish stew recipe, great for beginners and experienced cooks alike. Simply grab a pot and add the plant-based spread to melt over a medium heat.

Next, add the chopped onions and soften for five minutes. You don’t want them to brown a lot so keep an eye on them and stir often.

Now add the celery (if adding) and stir well, frying another five minutes. If you’re not adding celery just keep softening the onions for five more minutes (so the onions will be fried for ten minutes total). The onions should be a lovely golden color, as in the photo below.

Next, chuck in all the other ingredients except the parsley. For the seitan, I do NOT recommend chopping it.

Instead, I make a small incision in it with a knife, grab it (use your nails if needed) and peel off a chunk to get a texture that’s more “meatier” and will absorb the flavours better. You can see what texture you should be aiming for in the photo below.

You might see some foam on the top from the Guinness, but don’t worry, it will disappear while cooking, no need to skim it off.

If you don’t have any vegetable stock on hand you can substitute with the same amount of water and add a stock cube or bouillon. Check the package for how much to add but one large stock cube or four-five teaspoons of bouillon should be enough for five cups of water.

I usually cut the potatoes into rough chunks around the size of walnuts, and a few I chop small so they “dissolve” in the stew.

Make sure not to cut all your chunks very small or it will make the broth cloudy and too thick as they disintegrate and you have a bowl of mush instead of a beautiful stew with a clear brown tasty broth.

Increase the heat to high and when it boils, lower to maintain at a lively simmer for ten to twelve minutes. Test the potatoes to see if they are soft all the way through, if not, test every two minutes after.

The stew is done when the potatoes are cooked through. Ladle into bowls and sprinkle the chopped parsley over.

This vegan Irish stew keeps beautifully in the fridge for about 5 days and also freezes very well.

Did you make this stew? Let me know how much you loved it with a star rating in the recipe box, review, or comment below.

I'm not a native English speaker; what is the difference between stew and soup?

Hi Adri, the difference is usually the amount of liquid - in soups they can be smooth or have vegetables but are mainly liquid, whilst with stews they are never smooth and have chunks of vegetables or meat or whatever and less liquid.

My hubby loved this recipe! So delicious and tasty! We love that this is vegan and easy to make! I can’t wait to make this again soon!

This is such a delicious stew. So packed with veges and the Guinness is key. Thanks for sharing.

This is absolutely delicious! I love that it’s such a crowd pleaser for the whole family

This is total comfort food at its finest!