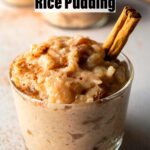 Sweet and creamy with so much flavor and such an easy dessert to make, you’ll love this vegan rice pudding Instant Pot recipe, made Spanish style.

I love my Instant Pot (electric pressure cooker) so much, I live in Spain and it’s been a lifesaver during the hot summer months as it barely gives off any heat so helps keep my kitchen cool but still allows me to enjoy cooked meals.

Up until now, I had mainly used it for savory dishes, but all that has changed now I’ve seen how easy it is to make delicious desserts with it.

Why you’ll love it

I’ve made this Spanish style as I love arroz con leche. The orange and lemon peel gives the rice an amazing subtle taste and perfume that just can’t be substituted (using lemon or orange extract doesn’t produce the same results) and it makes for a refreshing change from traditional rice pudding.

Arroz con leche doesn’t normally have raisins in it but I love raisins in my pudding so I added them, they are optional though so if you don’t like them you can just leave them out.

If you love easy vegan dessert recipes then I highly recommend you also try these quick vegan matcha cookies or this two-minute vegan vanilla mug cake.

You will need eleven easy-to-find ingredients to make this delicious instant pot rice pudding recipe. Below I’ve included an image to help you check to see if you’re on the right track, and I also discuss where substitutions can be made if you’re short an ingredient or would prefer to swap something out.

Vanilla extract: Vanilla and cinnamon pair beautifully. I’ve used just a little here and it really adds to the flavor, but if you don’t have it or don’t like vanilla then you can omit it. I wouldn’t substitute it with any other flavor as it might clash with the citrus and cinnamon flavors.

Lemon peel: This gives a really wonderful clean warm flavor. Make sure to use the peel from organic unwaxed lemons only. If you don’t have any lemons you can omit this. I don’t recommend substituting it or increasing the orange peel (too much will be overpowering).

Orange peel: As with the lemon, use the peel from organic unwaxed oranges, and don’t substitute if unavailable, just omit it.

Vegan butter: Some good quality vegan butter really adds to that beautiful silky creamy mouthfeel and gives it a richer taste. Only use a vegan butter you actually like the taste of. If you’re in the USA, Earth Balance or Miyoko’s cultured vegan butter are great. For those readers in Europe who might not have access to these brands, Violife or Flora Original are good options.

Raisins: I love tasty plumped-up raisins in my pudding but they are optional so if you don’t like them just omit them.

Cinnamon: I can’t imagine Spanish-style creamy rice pudding without cinnamon but if you really hate it I guess you could leave it out. I use ground cinnamon and don’t recommend using cinnamon sticks – as you won’t be stirring, you’d end up with one patch of very strongly cinnamon-flavored rice.

Rice: As for which type of rice to use, I use short-grain rice, arborio rice would do as well, and even long-grain white rice- I would save your jasmine or basmati rice for other dishes though. I don’t recommend using brown rice as it gives a bit of a nutty flavor but you can if you really want to, just increase the cooking time to 14 minutes.

Sugar: I use white sugar. You can use brown sugar, coconut sugar, or maple syrup if you prefer although it will make the pudding considerably darker. Make sure you’re using a vegan brand of white sugar if you’re in the US (one that hasn’t been processed with bone char). I like my rice pudding sweet but you can reduce the amount of sugar or sweeten to taste if you prefer.

Salt: Just a touch of salt really helps the flavors pop and helps the rice cook better but you can omit it if you prefer.

Almond milk: Plain unsweetened almond milk is best. You can use sweetened if you can’t find it unsweetened but in that case, I would omit the sugar and add it at the end to taste. I prefer the taste of almond milk in this recipe but you can use any other plant-based milk (oat milk would also be great), just make sure it’s one that you like the taste of.

Coconut milk: This makes the rice even creamier so please don’t omit it and don’t worry, you can’t taste it. If you don’t have any coconut milk you can substitute any other plant-based cream, but add at the end of cooking instead of at the start as it may separate. Alternatively, you can swap it out for the same amount of almond milk, just know that it won’t be as creamy as it should be. If opening a can of coconut milk to use, you’ll have some leftover (perfect for this chickpea spinach curry!)

Making vegan rice pudding in the Instant Pot is super easy. In this section, I go into detail and use photos to illustrate steps, in case you’re a beginner cook or unsure about anything.

First, gather your ingredients. Wash the fruit and peel two long strips (from stem to end for example, or all the way around the orange) from both the lemon and the orange (so four strips total).

Try to get as little of the white pith as possible. A vegetable peeler or potato peeler is great for this. The strips should be roughly one and a half inches thick and three to four inches long.

Next, grab your Instant Pot insert and add the rice, almond milk and coconut milk, sugar, lemon and orange peel, vegan butter, cinnamon, and salt. I don’t bother rinsing my rice as the extra starch helps to thicken the pudding.

Stir to distribute all the ingredients, don’t worry, it won’t come together just yet but that’s fine. The cinnamon might clump a little as well, and that’s also fine. Image number one below is what you can expect to see.

Select high pressure on your instant pot and set it to ten minutes. Make sure to turn off the “Keep Warm” option. It will take around ten to fifteen minutes to come to pressure, depending on how hot or cold it is that day and the temperature of your ingredients.

Once the ten minutes are up, leave to natural release for another ten minutes and then quick release to get rid of any remaining pressure and remove the lid.

At first glance your rice might appear too liquidy but don’t worry, it’ll thicken up to a creamy texture in a few minutes. Image two above is how the texture will be after a few minutes.

Gently fish out the four strips of lemon and orange peel with a fork (they will be very soft and break easily) or cooking tongs.

Add in the vanilla extract and the raisins if using, give it a good stir and leave to cool. I find things in my instant pot cool much faster if I remove the insert and leave it on a rack.

You can enjoy this delicious rice pudding warm, at room temperature, or leave it in the fridge to chill and enjoy cold (remember it will thicken more as it cools, and don’t put it into the fridge until it has cooled to room temperature).

Serve as is or with extra cinnamon sprinkled over the top. A cinnamon stick stuck in it and some lemon zest on top makes a nice decorative touch as well if you’re entertaining.

In Spain, homemade rice pudding isn’t usually topped with anything and is eaten alone but fresh fruit is always a good idea, and I do love a dollop of vegan ice cream if eating my pudding is warm.

My rice pudding is too watery, how do I fix it?

If even after cooling your pudding has too much liquid for your tastes, you can simply return it to the instant pot and saute on low heat until it has thickened and has less liquid.

My rice pudding is too thick, how do I fix it?

Add more almond milk a little at a time and stir after each addition until it’s at your preferred consistency.

My rice is still slightly uncooked?

I don’t have an Instant Pot, can I still make this?

Yes, you can make it on the stove top! I recommend adding the milk, sugar, lemon, and orange peel, sugar, and butter to a saucepan first and heating on high and stirring until the sugar has dissolved, then add the rice, and when it starts to bubble and simmer, place a tight-fitting lid on the pan, reduce the heat to the lowest setting, and leave for 12 minutes. Take off heat and leave to the side for ten minutes, then remove the lid, stir well, then add the extract and raisins.

Did you make this vegan rice pudding in your Instant Pot? Let me know how much you loved it with a star rating ⭐⭐⭐⭐⭐, review, and/or comment below.

Your tasty rice will last up to five days in the fridge but will thicken more the longer it's in there. To thin add more almond milk.