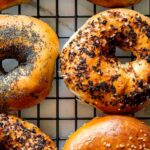 Are bagels vegan? As with so many bakery products, most people assume yes, but actually, that’s not always the case.

Today we examine what ingredients to look out for and hunt down a list of vegan bagels so you can enjoy them!

NB: Always double-check the ingredient label as manufacturers may change ingredients at any time. This is a particularly good idea for people who might not be vegan but may have egg or dairy allergies.

Ingredients to watch out for

Good news, a regular basic bagel is, in theory, usually a vegan bagel – or it should be. A plain bagel is usually made with simple ingredients like flour, malt, salt, sugar, water, and yeast, and can also have a sprinkle of poppy seeds or sesame seeds on top.

However many store-bought brands also contain preservatives and other animal products such as whey (a common ingredient in premade bakery products that have been mass-produced).

Luckily, it’s pretty easy to find out whether a store-bought bagel contains eggs or dairy products nowadays. The Food Allergen Labeling and Consumer Protection Act (FALCPA) of 2004 requires certain labeling of foodstuffs that contain major food allergens. Milk and egg are two of the eight major allergens and as such all ingredient labels must be labeled in one of two ways. Either:

In short, allergy labeling has made it easier now for you to ascertain whether a product such as a bagel is suitable for the vegan diet or not. Of course, aside from egg and milk, you’ll also need to keep an eye out for non-vegan ingredients such as honey or white sugar where bone char from animal bones was used in making it.

These are some of the non-vegan items you might need to keep an eye out for when getting ready to enjoy what you hope is a vegan bagel:

Much like when investigating my favorite tortilla chip brand (are Doritos vegan?), I was surprised to find out that there are also a few additives and preservatives that are not clearly vegan or not, as they can be derived from either animal or plant-based sources – you’ll have to use your own judgment when it comes to these additives:

If you’re getting some fresh bagels from a bakery and they look suspiciously shiny, you’ll also need to check whether an egg wash has been used on them.

Now that you’ve learned how to identify whether a bagel is vegan or not, you just need to be mindful of your vegan bagel toppings. If you’re out and about and want a bagel sandwich, some easy go-to vegan options are a classic bagel with smashed avocado, hummus, vegan cream cheese (such as Kite Hill), or peanut butter as a base.

Something else to keep in mind is that there are some certified vegan bagels available in the US, although if a bagel is not certified that doesn’t mean that it’s not vegan – simply that the company hasn’t applied for vegan certification. You can save yourself a little time by checking for a vegan stamp first before examining the ingredients list and any “Contains” warnings.

Some vegan guides warn against bleached flours, alleging they contain bone char, however, this has since been debunked.

Make your own bagels

Of course, if you have the time and inclination, one of the easiest ways to ensure your bagels are vegan is to make them yourself! It’s fun, cheaper and you can stick whatever vegan toppings you want on them. As an added plus homemade bagels usually freeze beautifully for up to three months so you could make up a big batch and then every day could be a bagel day!

You can stick with regular bagels or make different types of bagels (we love the pumpkin cinnamon crunch bagels below) and they will all be vegan.

Convinced? Then scroll down and choose which one of these beautiful vegan bagel recipes you’re going to make. Don’t have the time or hate baking (or maybe it’s just summer and hot enough already in your kitchen)? No worries, scroll down further to see which store-bought bagel brands are vegan in the next section.

Bite into a delicious bagel filled with warm cinnamon and pumpkin flavor. Crunchy cinnamon topping makes this bagel the best start to your day. 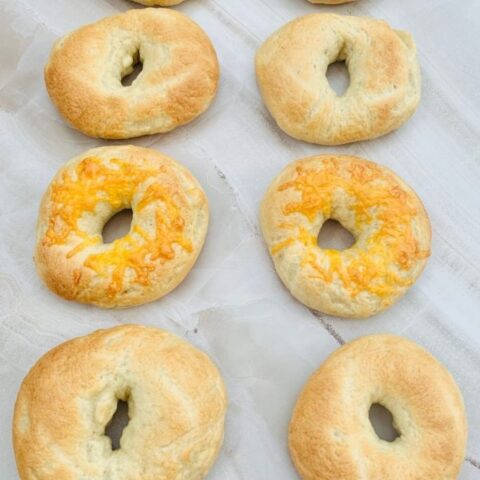 Easy to make and deliciously chewy, these vegan New York-style bagels are the perfect bagels for beginners to make. 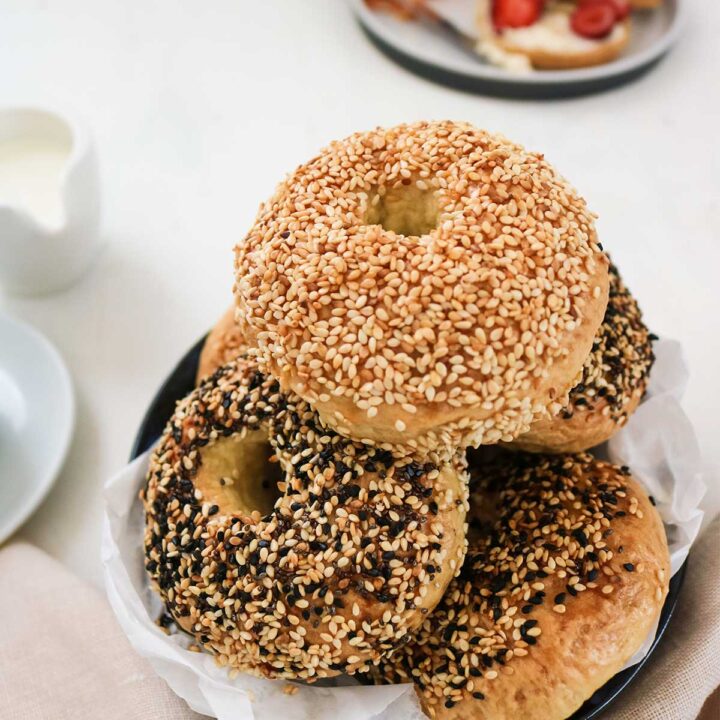 Super easy Vegan Bagel Recipe made with simple ingredients and the results are simply amazing. You get ultra-chewy fresh bagels every time you crave them. 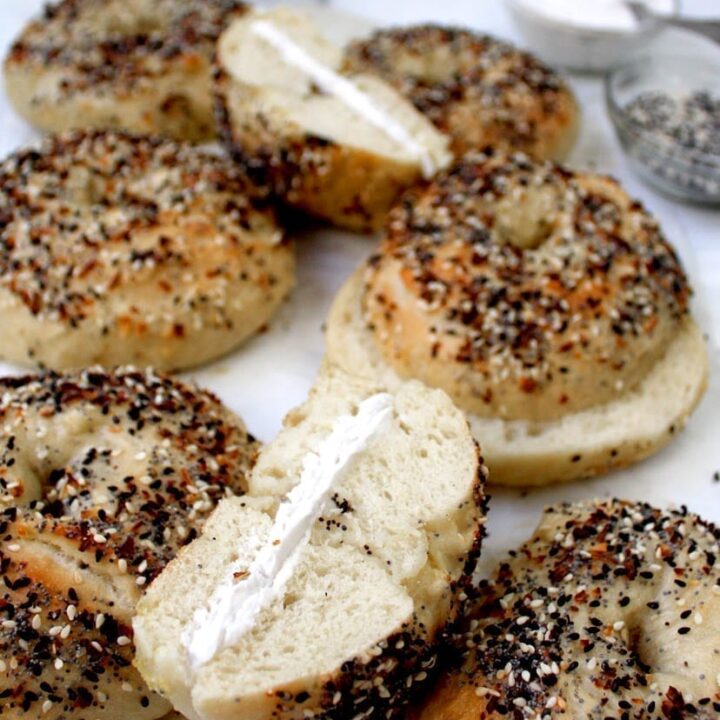 These vegan everything bagels are perfectly dense-yet-fluffy with a chewy outer crust and crisp cornmeal on the bottom. It's a customizable recipe as you can top them however you like but nothing beats a delicious, homemade everything seasoning! 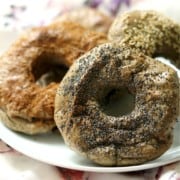 Photo Credit: strengthandsunshine.com
Fresh from the oven, homemade allergy-free bagels for everyone! Gluten-free, nut-free, vegan, a simple recipe for the classic and favorite breakfast carb! Choose your topping and flavors for a special journey! 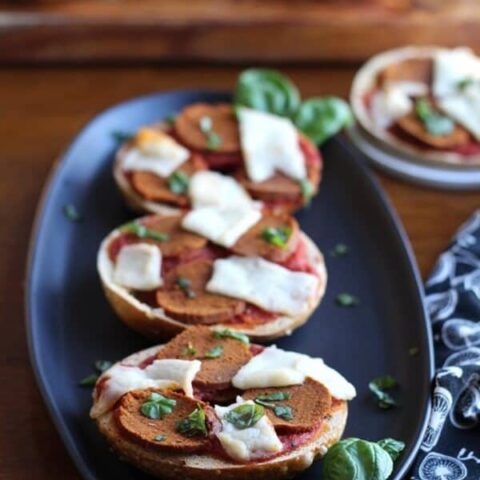 Making bagels at home is easy! These pumpkin raisin ones are perfect for a fall breakfast with lots of warming spices

Which store brands are vegan?

The following are all the store-bought bagels I’ve been able to identify – nonetheless, manufacturers can change ingredients at any moment so while I recommend that you gravitate towards these popular brands, double-check the ingredient list to be on the safe side.

It’s not an exhaustive list but it is an up-to-date one (as of January 2022), so do let me know in the comments if you find any other vegan brands.

Which coffee shops have vegan bagels?

If you’re out and about and get the vegan bagel munchies, or have run out of tasty bagels at home and need a fix there and then, you can head to these places and rest assured that your bagel will be vegan.

Note that I’m talking about the actual bagels themselves being vegan, not the toppings, so you’ll still need to apply some vegan logic when it comes to how to fill your bagel sandwich.

I hope you found this post helpful. If you know of any more vegan bagel brands or restaurants/cafes that serve vegan bagels, drop me a line from the contact section or leave a comment below and I’ll be sure to add it.

Wow! Thank you fir all this info! I never realized they sneak whey in sometimes!

Honestly, I had no idea either! Apparently, whey is super cheap because it's a waste product from making cheese and yogurt so they just randomly add it to stuff for more flavor!