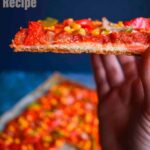 I’ve been making the best spicy pizza recipe for about 15 years and it’s still a firm favorite in our house. With easy-to-find ingredients, a thick luscious spicy garlicky sauce, a thin crispy base, and Tex-Mex-inspired veggies, you NEED this pizza in your life.

I’m vegetarian, not vegan, but I actually prefer this pizza without cheese – it’s ALL about the spicy chunky sauce. Having said that some crumbled cotija or feta, or even a sharp grated cheese like cheddar, is also super tasty on top.

This is an accidentally vegan recipe so vegans can eat it as is or add some Daiya shredded cheddar/Sheeze/Violife shreds or fork-crumble my super easy 1-hour vegan goat cheese on top.

I don’t recommend mozzarella, vegan or otherwise, because it doesn’t really go with the spicy flavours. Think more taco-style cheese.

I normally make an assortment of pizzas at home when I’m cooking up some tasty carby goodness (hey, go broke or go home, am I right?) so I’ll whip this one up alongside my tasty easy potato pizza and my white bean sauce pizza.

And if you’re in need of some more pizza inspiration I highly recommend checking out this EPIC vegan pizza list which has basically anything and everything veggie pizza-related.

What base should I use for this pizza?

Whichever you wish! Although that said I do really recommend a thin crispy one so the amazing thick sauce and crunchy veg flavours shine through. It really depends on personal preference.

Handsome hubby likes a thicker base and it also really pairs well with the sauce because it is chunkier than a regular pizza sauce. You can use prepared bases or mix up your own dough from scratch or use one of those premixed flour packs that you add oil and water to.

I’ve been experimenting with a healthier 24-hour pizza dough recipe lately which stretches beautifully, so if you don’t have a go-to recipe of your own I highly recommend making it (recipe for the dough just below). Also as a family of five, it just works out way cheaper to use a dough rather than premade bases, but you do you.

This is a super easy dough I use, I was inspired by this Pizza diet I heard about. Proofing the dough for at least 24 hours allows most of the gluten to be used up. Having said that you can use it straight-away.

The amounts below will yield about 5 large thin pizza bases, so you could use one straight away and leave the other four to proof. After proofing the dough you can keep it in the fridge for up to three days, or freeze it for up to three months.

Add the yeast to the water, stir until dissolved and let stand five minutes. Mix the salt and two flours together in a bowl and add to the water about 25% at a time stirring and working with your hands as necessary . Turn out onto the counter and knead until you have a smooth slightly sticky dough (5-10 minutes).

Cover with plastic wrap or a damp towel and leave at room temperature for 24 hours. Knock the dough back down, divide into five portions and either use, move to the fridge for up to three days (in tightly sealed containers with a little room for expansion), or freeze.

Pro tip: To roll your dough out really thinly for a large crispy base, don’t roll it out on a floured counter. Instead form into a ball, flatten, and roll out between two sheets of baking paper than have been lightly sprayed with a small amount of oil.

You can then just remove the top sheet and transfer the dough on the bottom sheet to a baking tray, add sauce and toppings, and place in the oven.

How to make the spicy pizza sauce

Let’s get down to brass tacks here. If you’ve been getting by with smearing some tomato puree or jarred pizza sauce on your pizza, then this spicy pizza sauce is going to blow your mind!

It’s not as convenient as sauce from a jar and it takes about 30 minutes to make, but oh wow is it worth it! It’s also the easiest homemade pizza and pasta sauce recipe ever and requires just a handful of ingredients.

It also amazing over pasta so I highly recommend making extra and freezing or canning it.

Chop two large onions finely and fry on medium-high heat for about ten minutes until golden, stirring often to prevent sticking and burning.

Don’t fry them until just soft, they need to be golden and brown at the edges, like in the picture above. This is really important for importing a ton of flavour to your sauce. It’s also important not to burn them as it will make the sauce bitter.

Add in the crushed garlic and stir for 2-3 minutes until the garlic is also browned (but don’t let it burn!).

The tabasco can be substituted with any vinegar-based hot sauce. I recommend adding just half a teaspoon at first, and when the sauce has reduced, test it and see if you want to add more (spice tolerance is a pretty individual thing but I like this sauce HOT HOT HOT).

When it starts to bubble, reduce the heat to medium (it should still be bubbling at quite a lively pace) and cook for 15-20 minutes until thickened and reduced like in the image below.

The sauce should be cooked uncovered so the liquid from the tomatoes can be reduced, but if it starts to spatter apocalyptic drops all over your backsplash and worktop, you can partially cover it with a lid. Just leave it ajar so the moisture can still escape.

Your sauce is done! Taste it, try not to swoon, and assemble your pizza.

Putting together your spicy pizza

First, you’ll want to roll out your pizza dough (if using, if not you can just add the sauce to a prepared base, sprinkle over the toppings and stick it in the oven following the crust manufacturer’s instructions).

I use large oven trays and get two big pizzas out of this recipe, if you’re using premade bases unless they’re gigantic, you may get up to three with the sauce and toppings amounts in this recipe.

I divide the dough in two and roll it out thinly. I then transfer it to the trays which I’ve lined with baking paper.

Add half the spicy sauce to each pizza and use the back of a spoon to smooth it all over the base. If you’d like to leave a crust, just smooth the sauce up to two centimetres from the edges (I despise crusts so I just slather the whole pizza with sauce right up to the edges).

As I said before, I’ve been making this spicy pizza recipe for a long time and I’ve tried plenty of different toppings, but this is my tried and true combo, kind of Tex-Mex style vegetables:

It sounds really simple but it is so good with these toppings. The toppings above are the perfect combo, but you can also switch it up and add:

Feel free to experiment as you please with the toppings. One of my friends also makes this a “taco” pizza by adding shredded lettuce, grated cheese, sour cream, refried beans, etc. after it’s been cooked. Yet another makes a “nacho” pizza by drizzling it with nacho cheese sauce after baking. I’ve been known to swoon over some ranch drizzled on top of my spicy pizza. You do you.

Just pop your toppings on the sauced-up pizza and it’s ready to go in the oven. I always sprinkle my toppings on from high up so that they spread out more evenly.

Preheat your oven to the highest setting (about 482-500F) for ten minutes. If you have a convection oven, make sure you do NOT use the convection setting.

Stick one pizza in a tray on the very bottom of the oven, touching the base of it. Bake for four minutes exactly. Now swap to the middle of the oven and cook for 11-13 minutes until the toppings are lightly browned to your liking.

Done! I often double up this recipe and you can put the second spicy pizza in at the bottom while cooking the first one but make sure to have two different timers set so you don’t get confused.

I normally pop the second one in on the bottom when there are four minutes left on the timer for the first one, and then move it to the middle when the timer goes off and I take out the first pizza.

That way I just need to remember to reset the timer for an additional 11-13 minutes.

This method gives you a perfect thin crispy pizza crust to go with your amazing spicy pizza toppings!

If you manage to not eat ALL of the pizza, then I applaud you. If by some miracle you do have some leftovers, you can place them in a Tupperware container or wrap in aluminium foil and keep in the fridge for up to five days.

This pizza is equally amazing cold and the flavours really deepen the longer you let it sit in the fridge – just watch the spice level, as with all spicy sauces it gets hotter the “older” it is.

To reheat just place in the oven at about 250F for ten minutes.

Did you like this spicy pizza recipe? Did you love it? Tell me all about it in the reviews below (click on the stars in the recipe card). Got a question? Don’t hesitate to leave a comment and I’ll get back to you within a day.

I love seeing you guys and your amazing takes on my recipes so if you make this take a photo and tag me on Instagram (@the_fiery_vegetarian).

1)You can substitute frozen sweetcorn for the canned sweetcorn.

2) I highly recommend doubling up the sauce. You can then make two pizzas or save the other half of the sauce for an amazing pasta sauce.

3) A thinly rolled dough or 2 thin bases go best with the simple toppings, allowing them to shine.

4) Don't use canned chopped tomatoes unless you blend them first.

This is amazing! So flavorful you don't miss the cheese! As a vegan, it's difficult to find vegan pizzas that are this good!

I am super intrigued with this recipe, and adding it to my "to make" list. It sounds so good with the tex-mex flavors and veggies!

This pizza looks amazing and so tasty! My daughter and I are going to love this especially since I can add pickled jalapeño slices! So excited to make pizza soon!

What a fun spin on pizza! We love spicy food around here and I can wait to make this for the family.

The spicier the better when it comes to pizza I say! These looks deliciously loaded.