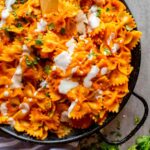 This tikka masala pasta recipe is such an easy recipe and so tasty. You simply blend up the sauce, simmer it for 15-20 minutes, and mix it with cooked pasta. Done!

It’s creamy, warm, fragrant, indulgent, and oh so moreish. The spice level is mild (you can dial it up with some cayenne pepper if you prefer) and it’s versatile enough that you can add in whatever veggies you wish for a satisfying quick well-rounded fusion pasta meal.

It’s dairy-free and egg-free so perfect for vegans and vegetarians as well, and those who are sensitive to gluten can swap out the pasta for a gluten-free version as the sauce itself is also gluten-free.

If you love tikka masala you might like to check out my one-pot vegan tikka masala recipe as well. If spicy or unusual pasta dishes are also your thing I highly recommend my creamy Sriracha pasta, easy harissa pasta or check out this list of 35 spicy vegetarian pasta recipes.

Tikka masala pasta at first glance looks like it needs a lot of ingredients, but really it’s because as with most Indian-influenced dishes, you need to have plenty of spices to hand.

Let’s take a look at what ingredients you’ll need (see the image below) and whether any can be substituted or omitted should you find yourself lacking any of them.

The tikka masala pasta is totally tasty as is, but there’s no denying that adding some vegetables and/or pulses would balance it out for a healthier meal, and also make it stretch to more portions.

These are what I commonly add to it when I make it:

The legumes and fresh spinach can be added a few minutes before the sauce finishes cooking. The peppers, broccoli, and frozen peas should be added when the sauce is first poured into the pot. Finally, the onions should be cooked before adding to the sauce – I’d suggest frying in the pot and then adding the sauce.

You can mix and match these suggested additions whichever way you prefer. I would point out though that I wouldn’t add both the peas and the legumes together, it’s just a combination I don’t think works very well, either one or the other but not both!

As I mentioned before, tikka masala pasta is really easy to make, but in case you have any doubts or are a less experienced cook, you might want to check out the images in this section to avoid going astray.

First, prep your ingredients. Peel and quarter or roughly chop the onion, peel the garlic, peel the ginger, and juice half the lemon. I recommend finely grating the ginger as well because it’s a good way to get rid of the more woody stringy fibers (they’ll be leftover in your hand after grating).

Blend until as fine as possible (it will still be a bit chunky). Add the tin of crushed tomatoes and blend again until as it’s as smooth as it’s going to get (image two below)

Next, add in the coconut milk and blend again until perfectly smooth (see image three below). Blending the chunkier ingredients first before adding the tomatoes and then the coconut milk will ensure the final result is as smooth and silky as possible.

Transfer the sauce to a medium-sized non-stick pot or pan (image four), and heat on high. This would also be a good time to cook the pasta according to the package instructions.

When the sauce has just begun to boil, lower the heat to medium-high, and leave the sauce to reduce for between fifteen to twenty minutes or until thickened to your satisfaction. The sauce will thicken slightly as it cooks and when the pasta is added (because of the starch from the pasta) so I recommend leaving the consistency a little looser than you think it needs to be.

I usually cook it for around sixteen to seventeen minutes for the consistency you can see in image five. When it’s done, take the sauce off the heat and immediately add the sugar (yes, tikka masala is a slightly sweet sauce), lemon juice, garam masala, and most of the chopped cilantro.

Stir for about a minute or until the sugar has dissolved. Add your drained cooked hot pasta (never rinsed) to the sauce, toss everything well (as in image six), plate, sprinkle the remaining cilantro over and serve immediately.

Optionally you can also drizzle something creamy over the plated pasta, such as extra coconut milk for vegans, or creme fraiche, natural yogurt, greek yogurt, raita etc. for vegetarians. It looks really pretty and is a nice added kick of tangy creaminess.

This tikka masala pasta recipe makes quite a lot of pasta, enough for six servings. If you’re serving fewer people I recommend cutting the ingredient amounts in half, or using the original amounts but less pasta and then storing the extra sauce in the fridge for up to five days, or freezing it.

Where at all possible, try to store any extra cooked pasta and sauce separately. If you have leftovers where the pasta and sauce have already been mixed together that’s okay.

You will need to reheat leftovers in the microwave or on the stovetop with enough extra water or coconut milk to loosen the sauce (a few tablespoons, depending on the amount of tikka masala pasta you’re reheating) until piping hot.

I do not recommend freezing the dish either when the pasta and sauce have been mixed.

Did you make this tikka masala pasta recipe? Let me know how much you loved it with a star rating in the recipe box, review, or comment below.

Take a picture and tag me on Instagram (@the_fiery_vegetarian) or connect with me on Facebook, I love seeing all your creations!

You can substitute the ginger and garlic with 1.5 tablespoons of ginger garlic paste if you wish.